Today for the first time, I encountered a composition by a woman composer.  In the collection of the Philharmonic Society of Bethlehem I found the cataloging for Johanna Kinkel’s Vogelkantate.  It was published by T. Trautwein in 1838.  It is a cantata for 5 voices and piano.  We have the printed score and parts. She labeled the work “Musikalischer Scherz” or a musical joke.  It is filled with bird immitations.

Johanna Kinkel (1810-1858) was a composer, pianist, choral director, poet, journalist, novelist, music teacher and historian. She was born Johanna Mockel in Bonn. Her father was a teacher at the French Gymnasium and her mother encouraged her musical talents. She studied with Franz Anton Ries and with his support she began a career as a coach, accompanist and choral directory while still in her teens.

Vogelkantate, her op. 1,  was published while teaching piano and studying with Karl Böhmer and Wilhelm Taubert in Berlin. The orginal owner of the score and parts was Timothy Weiss (b. 1800), whose name is inscribed on the cover. Timothy Weiss was a noted tenor; he also played clarinet and trombone with the Philharmonic Society of Bethlehem

You can look at the description of Vogelkantata in GemeinKat. 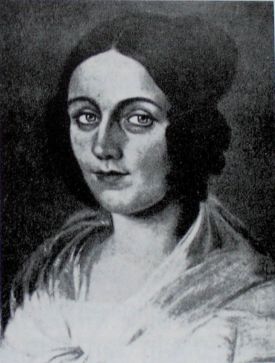 One thought on “A woman composer in a Moravian music Collection?”


Select a category to read about a topic.